My Citrix PVS Health Check PowerShell Script was nominated into the final round (Top3) of the Citrix GeekOvation Award. This means I have to present my “geeky solution” on Citrix Synergy 2015 in Orlando on the SYN501 Geek Speak Tonight Session. To be honest to speak in front of so much people is a new thing for me … and it makes me “a bit” twitchy …

To be nominated for this Award was not just a big surprise for me, I see this also as a honor and glory for my work. I would say it’s not so a big thing this script and it isn’t rocket science.

Dear GeekSpeak Tonight audience, please check out my PVS Health Check Script and provide me feedback if you want. Also have a look to my XenApp / XenDesktop Script.

At this place  I want to say thank you to Jason Poyner who gave me the idea for such kind of Script with his XenApp6 HealthCheck and where I took some code lines for the HTML output. To Martin Hartmann who helped me by learning PowerShell and of course to Aaron Parker (http://stealthpuppy.com) who was  the assigned CTP helping me polish off my presentation materials.

I won – thank YOU 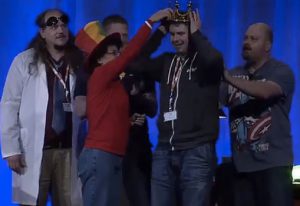 I won the competition and seems that I’m the not-yet-known Geek #1 this Year! Thanks you all! When I saw the work from to other two guys, I had the feeling to have no chance, not just because I’m the only not-native english speaker. David Ott with a great PowerShell script to modify the user profile and Shane O’Neil with the C-Sharp code to have a self healing VDI, GREAT!

Read this blog post from Shane and Paul, if you are interested on more PVS PowerShell stuff: http://blogs.citrix.com/2015/04/07/wait-you-mean-pvs-has-powershell and watch the recording of “SYN514: Turn XenApp and XenDesktop into capacity on demand with Provisioning Services automation”

I’m sure I also had luck to win, and now I have the chance to go to Las Vegas Citrix Synergy 2016. I also want to thank ControlUp for the AppleWatch they sponsored for the GeekOvation Winner.

Like already mentioned the idea about the health check with the HTML output comes from Jason Poyner. The main script with all the logics it’s from me. The hardest thing when you Script with PoSh on PVS that it doesn’t return proper PS Object, that mean’s you doing a lot of format-cut stuff to get what you want. If you want to know more about that read Paul’s blog section “PVS comes with a PowerShell add-in that is not an easy beast to tame.”

I’m currently working on a Script which shows PVS retries during a variable timeframe (day, week or month) and create a graphic output, in this way you can see at which time you maybe have a traffic jam on your network.

I also made a script to export/import target’s into PVS and another one for export and import in XenDesktop, if I have time I’ll polish and publish this here.