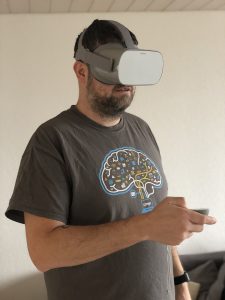 The Oculus Go is a very entry level VR with the benefit that you don’t need an additional Computer. The integrated hardware with an Android OS does all the work. But this article will not be a review of the Oculus Go as there are many others already available.

Usually, you use your Oculus Go with the apps in the Oculus store, but there is a known trick to load also other Android Apps to the Oculus, called “Sideload” and Android application. You need to set up your Oculus in Developer mode and then you are able to add APK files to the Oculus.

Here a good description of how to Sideload works: https://headjack.io/tutorial/sideload-install-app-apk-oculus-go

“Sideloaded” apps appear in Oculus Tv app in the section “unknown sources”, but unfortunately, I was not able to see the just uploaded Citrix Workspace App. I also tried after the installation of the Workspace app to just launch the Oculus Browser and open a Desktop from our companies “Citrix Web Receiver” (Netscaler, Storefront Web):

After that unsuccessful try to launch a virtual desktop, I tried to play around with sideloading other apps. I found out that the app Kodi and ES File Explorer appears in the Oculus Tv app in the section other sources. Both applications can be used to see and start other Android apps installed on the System.

So I can use the Oculus Tv to launch ES File Explorer and this app as a launcher for the Citrix Workspace App. Ok agree, all in all, sounds a bit like in the Movie Inception … virtual reality to Oculus app to native Android app to virtual desktop to other virtual desktops or virtual apps …

Unfortunately, I didn’t find out how to record the content running in Oculus when a sideloaded app is launched, so I had to trick for the video above, the first part is screen recorded, the second part is with a camera in the headset …

It’s pretty easy to set up an Oculus Go to run with the Citrix Workspace app, and the Oculus Go is an affordable VR headset. This is a cool tech demo, but not sure if I want to work a long time in an Oculus Go provided VR because this headset is really entry level. Assume headache and “VR fatigue” comes fast. Also, I miss a real Keyboard in VR. But with Augmented Reality or Mixed Reality, I think it can be a solution on the future to work with a virtual virtual Workplace!

For my tests I used:

If you are not yet “jumped” in the VR World I can really recommend the Oculus Go 64 GB as the first VR Headset. You can buy it on your local electronics store or on Amazon.