My Smart Home – Chapter 1: The Mirror

A colleague complained that he has a 22-inch screen which he doesn’t use anymore but he can’t sell it for a valuable price. So I said he can give me the screen for free and I would convert it to something cool, I had already an idea what I want to do with it …

My intention was to display some measurement data of my home which I collect with Netatmo or WirelessTag . Furthermore, I had the idea to supersede the paper wall calendar with a digital calendar. We use already Google calendar but my wife has the opinion that she needs a calendar not only accessible with a computer or a mobile phone, there must be also something on the wall to get faster an overview about the upcoming events.

Mirror, Mirror, on the Wall …

So I told my wife that I plan to install a monitor screen in our entrance area, honestly, the enthusiasm was very limited. I found out that the WAF – the wife acceptance factor for a monitor screen in the apartment is pretty low. So I needed another idea, accidentally I saw the  MagicMirror² Project which is the solution for my Software Plattform and also the word “Mirror” solves the WAF-Problem. 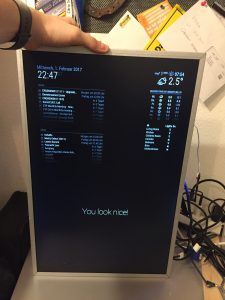 So there is now no more a monitor screen, instead, my project is a Mirror, a Smart Mirror to be precise. Behind the Mirror is a Raspberry Pi 2 located which is powered on 24/7, rather the power of the screen itself is controlled by a MyStrom Wifi Switch  in the early morning a motion detector turn the mirror on, at other hours in the day the screen can be activated with a push on a MyStrom Wifi Button. If the Mirror is powerless it looks like an ordinary mirror.

At the end this was how my prototype looks like: 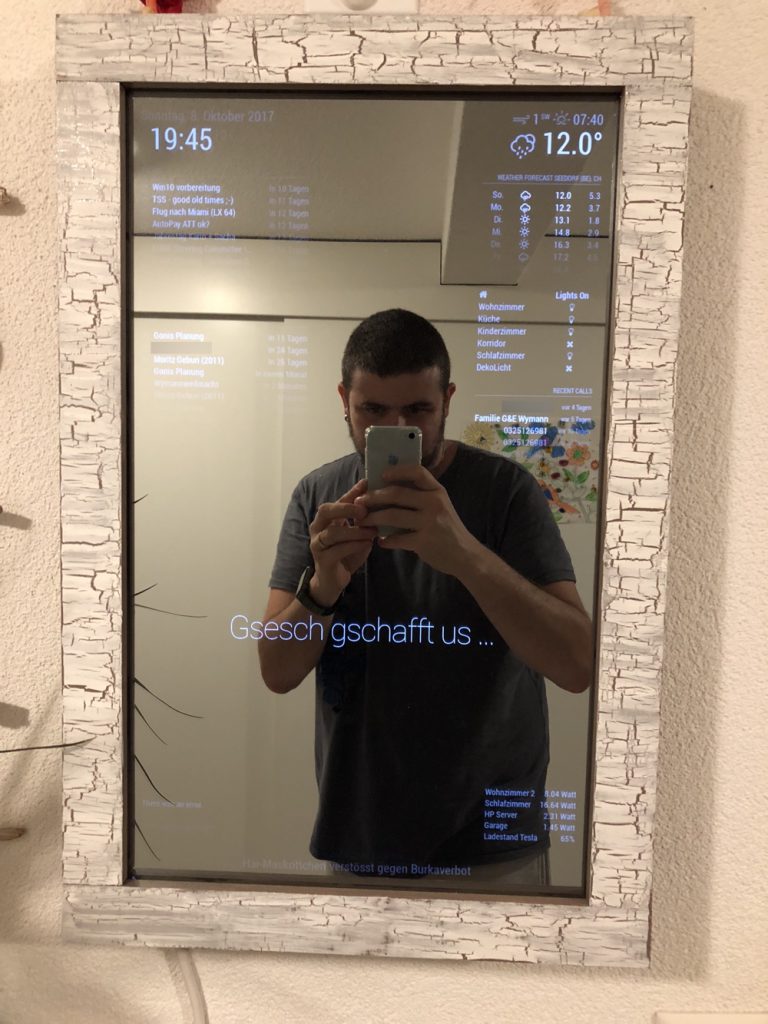 It was a long journey and I invested a lot of hours until I was happy with the result of my project.

First I started to cover the screen with an acrylic glass laminated with a mirror foil. I was not satisfied with the result, I had inclusions of dust and air under the foil. Only the more expensive but high-grade real Spy-Glass from myspiegel.de made me happy.

It was also difficult to decide which content should appear on the display.

Top left
– Date and Time
– Google calendar from my wife 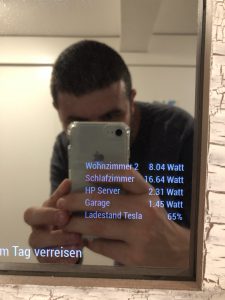 (As Tools I used a hot glue gun, a saw, and some screwdriver )

The mirror definitely gives an added value, but it’s really only for DYO’er or Nerds … No Enduser-Friendly product. It also needs maintenance.
This is a device for consuming information but you cannot interact with your devices. Maybe in Some years possible with a “Touchscreen-Mirror”.

+ Added value in a Smart Home
+ Cheap
+ – Open Source (Open to integrate other things, improve code vs Security)
– Not an End-user product
– Needs Maintenance
– Only show information, no interaction with devices

4 Responses to My Smart Home – Chapter 1: The Mirror