No more able to start SOAP on PVS

After the last monthly Microsoft Security Updates one of my PVS Servers was no more able to start the SOAP service. I received an Event 7000 with the message:

The Citrix PVS Soap Server service failed to start due to the following error: The service did not respond the the start or control request in a timely fashion.

I live in Bern, and we are known as slow-paced people here in Bern, probably because of our slow sounding accent. So my idea is if the service need more time to start, I’ll give him more time. 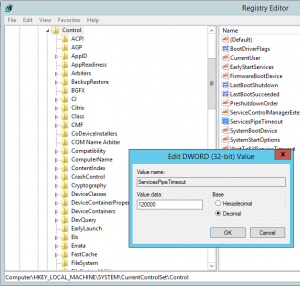 I’ve created a new DWORD called ServicesPipeTimeout  with the value 120000 in HKEY_LOCAL_MACHINE\SYSTEM\CurrentControlSet\Control which means the service has 2 minutes time to start. After a reboot my SOAP was again up and running.

By the way and additional tip according this service… SOAP is sometimes bitchy … it’s a good idea to set the service to auto restart after a crash.