XenDesktop & XenApp FMA (7.x) HealthCheck – Oops!… I Did It Again

Some months ago I’ve created the Citrix PVS Health-Check Script which is a based on the idea and some parts of code from the Health-Check Script for XenApp 6.x of Jason Poyer (http://deptive.co.nz/) .
Because now XenApp 7 with the Release 7.6 is finally in a state where considering an upgrade of the 6.x farms make sense, I belief that the demand for a XenApp 7.x Health Check Script grows.

So I did it again and took the “HealthCheck framework” to build a new version which combines the Power of the Citrix PS-Snappins for XenDesktop/XenApp and  the HTML-Output-Script of the existing HealthCheck Scripts.

The result is a new HealthCheck Script which is usable for XenApp and XenDesktop 7.x and what makes me also happy, with only a few line of more code the Script is downwardly compatible for XenDesktop 5.6 environments. 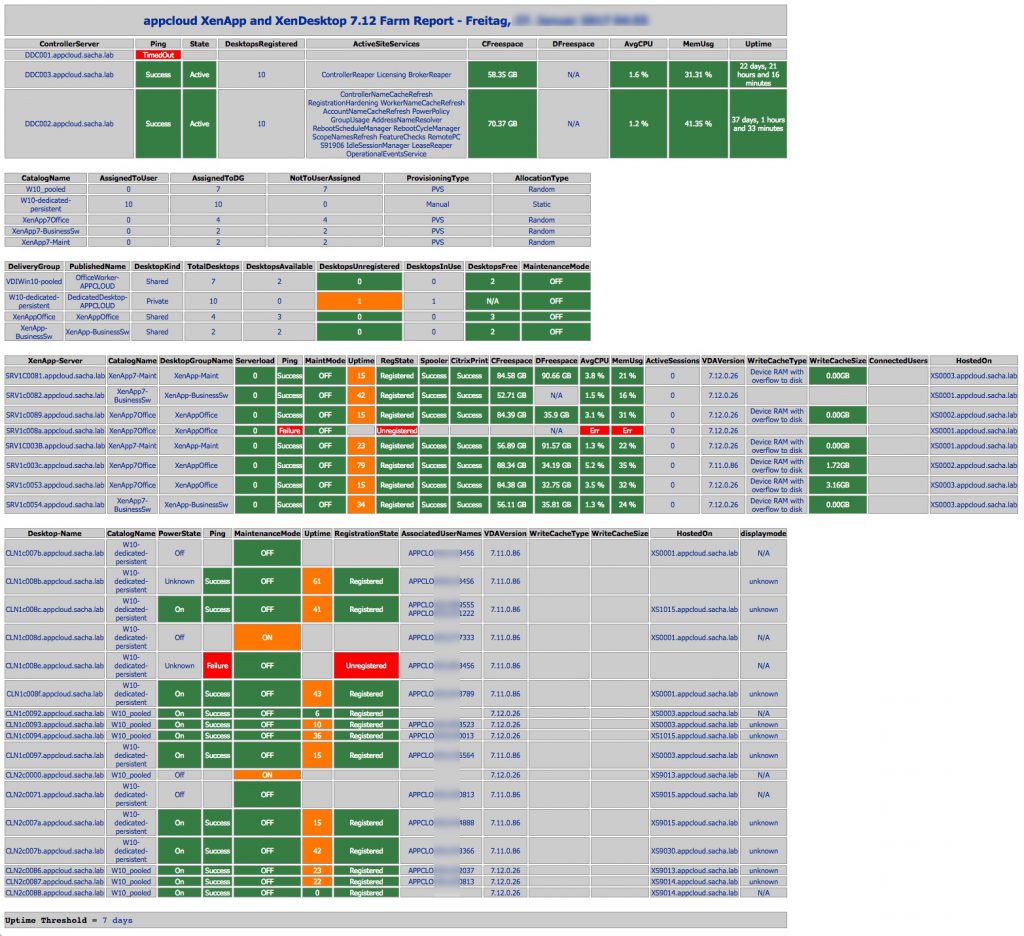 This is just the first version and I’m sure that more check’s need to be added. Feedback and “Feature requests” are welcome … And to be honest I have not yet a big environment to test my Script, so please be insightfully if you find some bugs and report them to me.

In the first part of the Script you are able to configure some parameters. You can decide if you only want to see the “bad” Desktops on which something it’s going wrong or if you want see everything. In huge XenDesktop environments you want definitely only see the bad machines …  ( $ShowOnlyErrorVDI = 1 ) Also you can decide if you want only report XenApp or only XenDesktop or both. The Desktops and XenApps are in two different Tables. It’s also possible to exclude Collections ($ExcludeCatalogs) from the Check, so virtual Desktops which are for testing purposes are not checked.

If you have a feature request or a bug report please post it direct on GitHub.

Update 12.05.2016 (Version 0.95):
– Check CPU, Memory and C: of Controllers
– XenApp: Add values: CPU & Memory and Disk Usage
– XenApp: Option to toggle on/off to show Connected Users
– XenApp: DesktopFree set to N/A because not relevant
If you need a Health Check Script for XenApp Version which are older than XenApp 7.x see http://deptive.co.nz/xenapp-farm-health-check-v2 where it’s an excellent work and the inspiration for my HealthCheck-Scripts!

The code is on GitHub:

For Bug Reports or feature Request please use GitHub, of course you can also contribute on this code!