Citrix Provisioning Services is in my point of view an incomparable way to deliver a Software image to a  system. It’s not a kind of an known enterprise software deployment, rather it’s a way to stream a virtual disk during runtime to hardware. Beside of PVS, the acronym of Provisioning Services.

This article doesn’t explain what’s PVS and how it works. It only shows my personal best practice to have the fastest PVS target device. It’s maybe not the only one and right solution to work with PVS, e.g. for VDI other approaches would match better.  In the last couple of years I was working on multiple projects to introduce PVS OS streaming for XenApp servers on physical hardware or virtualized servers. The following instruction shows my way to deliver the fastest PVS Target for read-only XenApp servers, or in the XenApp replacement this  role is  Xen Desktop 7.x  App Edition called .

In this article I only mention performance relevant topics, I will not talk about HA, continuous availability or about PXE, TFTP and so on.

#1. Reduce reads from disk, make use of Standby Memory for vDisks

The best way to increase performance is to reduce work, in this  first step it’s to reduce the hard disk read by reading virtual hard disk files (VHD’s). This can be achieved by make use of the Windows disk cache, this approach is possible on physical PVS servers and as well on virtualized PVS servers on any hypervisor. Using the Windows disk cache means that files which are read from disk, are cached in Standby memory of the Server.
(If you are using XenServer as hypervisor have a look to the IntelliCache feature, http://blog.citrix24.com/how-does-intellicache-work. )

To make use of the file cache you need:

Having the vDisk’s on local disks is not the common way to work with PVS, keep in mind that you have to synchronize the files on all servers in PVS farm.

You can check if the file cache is used properly by having a look in the resource manager. If you have nearly no free memory and have a lot of use standby memory it’s a good sign: 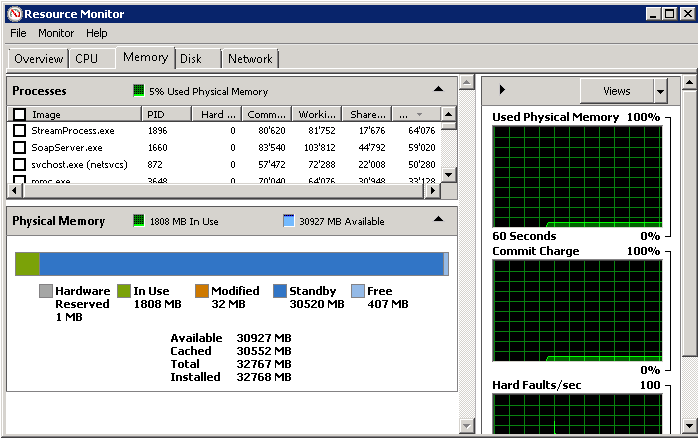 To have a deep dive look in the cache use RamMap and keep an eye to File Summary:

The second second way to increase performance is to use fastest possible storage, hard disk drives are quite fast today, solid state disks are faster but Ram is still the fastest memory. Because we need on the Target device only the Write Cache it doesn’t matter that the Ram is a transient memory.

With AS SSD Benchmark you can measure the speed of your disk.

Target Device with WriteCache on Ram: 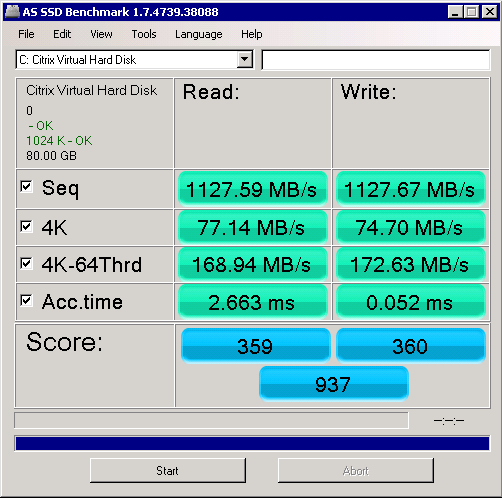 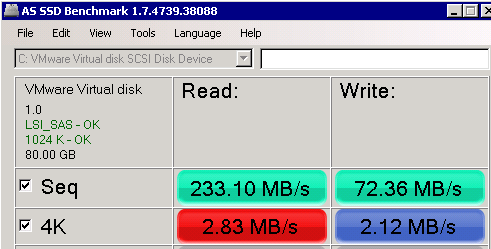 ( AS SSD Benchmark is Freeware and you can download and donate on: http://www.alex-is.de/PHP/fusion/downloads.php?cat_id=4&download_id=9 )

Keep in sight the Memory

When you working with Write Cache in the Target device Ram you must  appreciate the dangers of it … If you are running out of WriteCache the Target Device, perhaps a XenApp server with 50 users on it, will reboot immediately .
(By the way …  Citrix Provisioning Services 7.1 offers a great new feature, it’s the possibility to Cache to Ram with overflow to hard disk. Do not use it … it doesent work proper! Waiting for a hotfix.)

4#. Use all exiting best practice guides for tuning:
(for all what I’ve forget here … )